This AR-15 ambidextrous magazine release from CMMG is designed to provide the shooter with increased leverage for easier magazine removal. The CMMG Zeroed Ambidextrous Magazine Release was designed with both right- and left-handed shooters in mind.

The CMMG Ambi Mag Release has an extended-release bar that provides the shooter easier access and creates more leverage than OEM releases. In addition, the serrated surface on the extension offers a no-slip surface for maximizing purchase and control. This helps shorten magazine changing time whether you use the right- or left-handed operation.

The CMMG AR-15 ZEROED Ambidextrous Magazine Release is one of the few mag releases on the market designed for true left-handed use. The release and its primary components are cut from high tinsel-strength steel, given a black nitride finish for attractiveness and durability, weighing in at a scant 0.67 ounces. In addition, the release’s spring is constructed from high-strength spring steel for sure and consistent operation.

The CMMG Ambi Mag Release is compatible with all Mil-Spec AR-15 lowers. The release installs easily without special tools, and no gunsmithing experience is required. The mag release installs exactly the same as the factory magazine catch and functions with the original and aftermarket mag release buttons. 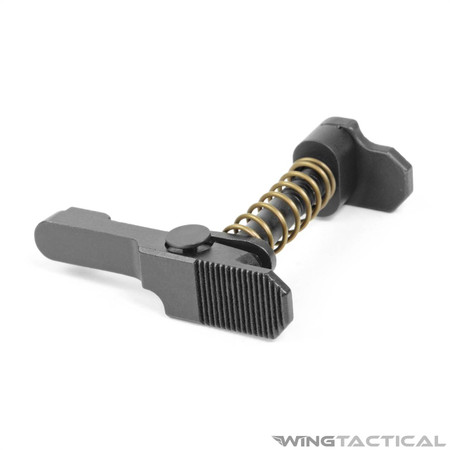