There are places where complicated definitely doesn’t make things better. Forward Controls Design understands that when you’re shooting you don’t want to have to hunt for a button or switch paddle, and you really don’t have time to think about how a control or release is operated. If you want a truly ambidextrous magazine release that operates intuitively, the Forward Controls Design AR-15 Ambidextrous Magazine Release (EMR-A) is the one for you.

They Put in Years of Thought So You Can Forget It

The Forward Controls Ambi Magazine Release was years in the making. Sometimes creating simple is a complicated process. While other manufacturers might have rushed the Ambidextrous Magazine Release into production after the first design was born in 2015, the folks at Forward Controls knew it wasn’t ready. They continued to work on the catch and lever until they’d found the shape and geometry that make their Ambi Mag Release so intuitive that it’s better than ergonomic, it’s natural to use.

Lever placement on this Ambi Mag Release mirrors the right side release button. It’s designed with a low profile lever that keeps it out of the way. The mid and lower portion of the lever are textured to provide grip as well as intuitive guidance. Forward Control achieves this through the use of their Multi-faceted control surface which uses a combination of V-shaped serrations and single directional serrations that provide traction and create a natural indexing point.

Strength You Can Trust

The Forward Controls EMR-A ships with a 10.9-pound replacement magazine catch spring. Replacing your standard weight catch spring with this stronger catch spring will provide added security, making it much less likely that you will experience an unintended magazine drop when slinging your rifle, even with a full battle vest. Forward Controls considers the use of this spring integral to the proper function of their Ambi Magazine Release. 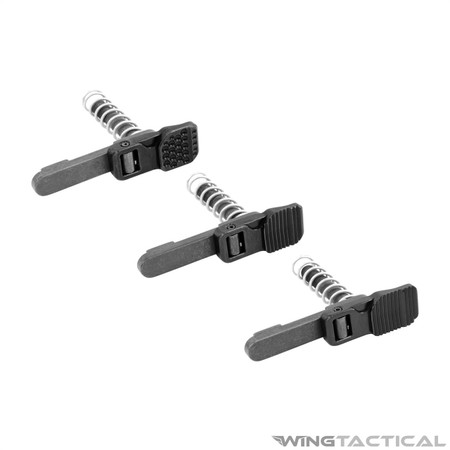