The stock AR-15 bolt catch leaves a bit to be desired. While Mil-Spec is “standard” it’s not really efficient in a lot of situations. There have been modifications to the Mil-spec AR 15 bolt catch design in the past, but most of them fell pretty short of ideal. Elongated release levers snagged on things and still didn’t feel quite right under hand. It’s time for a change, and it has arrived. Strike Industries’ latest offering in the AR extended bolt release category is the Strike Industries Extended Bolt Catch (SI-XBC).

The bolt release paddle of this AR extended bolt release is shorter than Mil-Spec catch paddles but broader with a grooved surface. This allows for easier operation and solid purchase on the paddle whether you use a thumb or palm engagement method even if you’re wearing gloves. In addition to the wide bolt release paddle, this Strike Industries Extended Bolt release also features an enlarged lower bolt catch paddle that makes locking your bolt carrier group back easier, even in high-stress situations where adrenaline may impact the precision of your actions.

The SI Extended Bolt Catch features a streamlined design that won’t snag in the field and marries beautifully with forged Mil-Spec receivers as well as most billet receivers. The SI-XBC is a Cast 8620, case hardened AR extended bolt release designed to be a “go fast” addition to your current AR system. This is a drop-in component that will install in place of your stock AR 15 bolt catch without extra modifications. While this is not a machined piece, the casting and hardening processes employed by Strike Industries in the production of this Extended Bolt release provide a product that is far superior to the injection molded products produced by competitors. 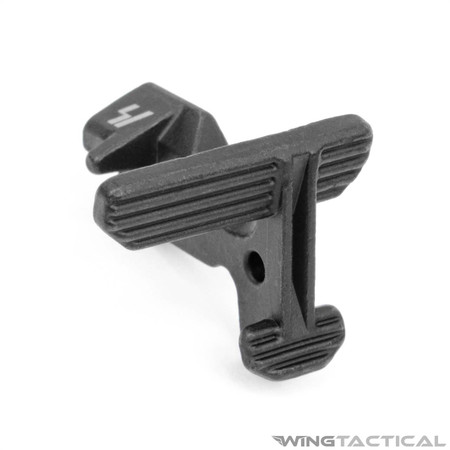