When you’re ready to add a hand stop to your weapons platform. There are many to choose from but none are as versatile as the RailScales Karve-P models that are now on the market. You will save weight and gain control with a Karve-P polymer hand stop on your weapon.

Available in Both KeyMod and M-LOK

If you need an M-LOK handstop the Karve-P Polymer is the one. Whether forward or reverse this hand stop adapts in seconds to accommodate your grip preference. Maybe your rail needs a KeyMod handstop, not a problem, the Karve-P also available in KeyMod configuration. The Karve-P installs and easily adapts to your grip choice. It is lightweight and reversible to match your shooting style. That is a true four for the price of one deal.

American Quality for A Quality American

This Karve-P KeyMod / M-LOK handstop is crafted from a high-temp polymer material that is virtually indestructible. The people at RailScales have created the Karve-P Polymer, a compact, ultra-light, and durable handstop. They work hard to maintain high quality while building American jobs and still keeping a great price point. The Karve-P can be yours in either Black, FDE Tan, or Sniper Grey to match your build. So, there is also one that will look great under your rail. 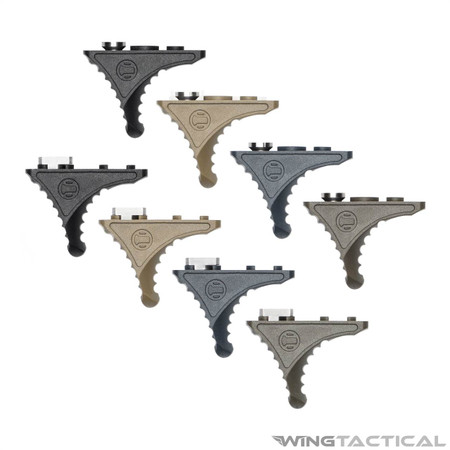