*Hyper-light magnesium handguard barrel nut interface tolerance is tighter and handguard may need to be tapped on with a plastic/rubber hammer. Light heat from a heat gun can also ease installation.

*Handguard Torx screws should not torqued more than 40 inch pounds. (Loctite is recommended.)

Have you been wanting to move up to a free-floating rail system? Maybe you already have such a handguard in place and really need something better. I know there are lots of rail systems on the market. However, the crowd of competitors pales in comparison to the magnesium hyper-light V7 handguard. This isn't simply more furniture for your AR, it's the crowning touch of excellence you need for your AR.

Aluminum is the material of choice for most free-floating rails, and it does a fair job in its own right. However, when V Seven designed their magnesium handguard they took a fair material and pushed it over the top. Creating an alloy of magnesium and aluminum gives you a far superior component. Weighing in at about 30 percent less than it's heavier all aluminum brother, the V7 handguard adds only grace to your AR. You will find that the weight saved by your new magnesium handguard doesn't in any way weaken your rifle. Strength and rigidity lie beneath your support hand and confidence in your weapon will grow.

It's A Wand of Destruction

The V7 handguard sports a sleek profile that just fits your hand and brings your rifle closer in tune with your body and mind. You can feel the precision-crafted magnesium handguard guiding your weapon from one target to the next. This is the ideal handguard for competition shooters. Precision adds to grace which builds confidence and leads to trophies. The only downside of the V Seven hyperlight M-LOK handguard is the long hours that their engineers are going to have to log trying to outdo themselves. 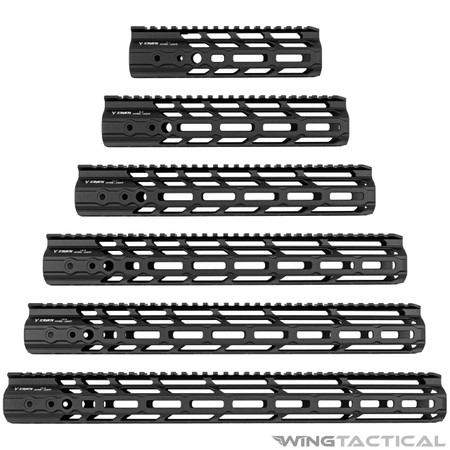