So, your ultra-light build is wrapping up, but you need that finishing touch for it to be just right. You already put in aluminum takedown pins and they’re kind of okay, just not exactly what you wanted. To make takedown go faster and add that custom, yet utilitarian edge to your weapon you need a set of aluminum V Seven Easy-Pull Takedown Pins.

Aluminum Is Much Better Now

Your new AR-15 extended takedown pins are machined from an alloy that in the industry is known as super aluminum. That is because it is super-hard and super- long lasting, making it the perfect match for your new super sharp ultra-light build. V Seven Easy-Pull Takedown Pins weigh in at less than half of their steel ancestors while remaining ultra-durable. So much so they deserve the lifetime warranty endowed to them by V Seven Weapon Systems.

You Drive, I Don’t Want To

Even a good cleaning can be an aggravation when you can’t find that stupid punch when you need it. I know, you have half a dozen back at home on your bench, but you’re two states away in the middle of a competition. Hey, been there, done that, and bought the T-shirt. You will never have to find a punch and drive out takedown or pivot pins, once you install a set of AR-15 extended takedown pins by V Seven. The only tool required for this is your fingers, just grab and pull, then get on with business as usual. Wouldn’t you rather spend time shooting instead of looking for lost tools? Switch out those pins and get back in the game. 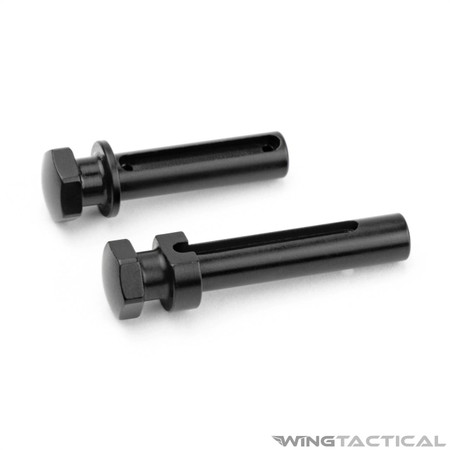