Are you ready to take your ultimate lightweight build to the next level? You have taken great care, I mean you’ve bought composite this, and fluted that, so don’t laugh when I mention your firing pin. I’m talking about a high-end AR-15 titanium firing pin made by V Seven. Weighing in at almost half the weight of a conventional steel firing pin, a titanium firing pin will take off that little bit more.

You not only get the chance to shave off just a little more, you also gain speed even if it is just a micro-second every little bit helps. I know you’ve seen the Olympics where a competition is won or lost by less than the blink of an eye. In competitive shooting where you fire many rounds just think how many eye blinks that AR-15 titanium firing pin will give you. You may be very good, however, wouldn’t you like just a little bit of an edge.

You don’t have to be a rocket scientist to know that titanium is much stronger than steel, consequently, that’s why V Seven chose to use it in their high-end firing pin. Lighter, stronger, and faster wow sounds a lot like Superman, I guess that makes your new AR-15 titanium firing pin a Super firing pin. I wonder how many rounds a standard steel firing pin will take before failing? I’m not a metallurgist, but with titanium being stronger than steel you can bet it’ll outlast that old steel relic. Come into the 21st century and give the V Seven AR-15 titanium firing pin a try. 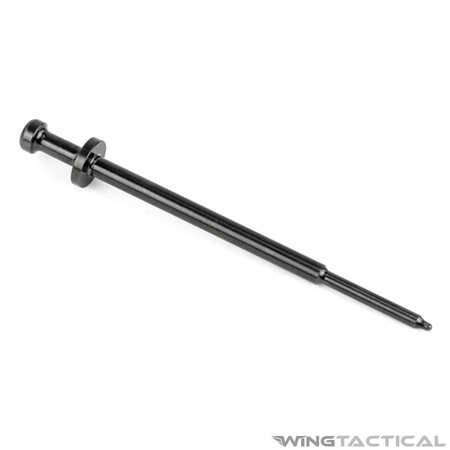