**A full-auto (A.K.A. M16) bolt carrier installed in a standard semi-auto AR-15 will not make the gun fire full-auto.

Whether you're working on a new build or looking to upgrade your existing AR, one thing you have to consider is a quality BCG. The bolt carrier group is the core component of an AR-15, so it should always be of the highest quality. Spike's Tactical offers their Mil-Spec Phosphate Bolt Carrier Group to make your AR-15 the best it can be. Believe it or not, you don't have to blow the kids college fund to do it. The Spikes Tactical M16 Bolt Carrier Group gives you top-shelf quality at a reasonable price. Their Mil-Spec M16 bolt carrier group is rated for full-auto fire. While it is designed to handle that, it will run just great in your AR-15.

This BCG front Spike's Tactical is machined to the tightest tolerances to ensure a perfect fit and flawless functioning. The carrier, extractor, and gas key on your Spike's Tactical Mil-Spec M16 BCG are all CNC machined from 8620 tool steel. That's not because they have to do it that way, it's because you deserve the best BCG in your gun. Spikes attaches the gas key with premium grade 8 screws which are staked in place, there's no Locktite here. You have to have this feature on your Mil-Spec M16 bolt carrier group because you don't want that gas key to move.

The Spike's Tactical Mil-Spec M16 BCG doesn't have just any old bolt shoved inside. Spikes Tactical subjects every bolt to high-pressure testing as well as a magnetic particle inspection. Those fancy words mean that no bolt will leave their facility if there is even a microscopic flaw. Even though some shooters don't use it, they didn't forget the classic forward assist. The Spikes Tactical M16 Bolt Carrier Group has the teeth to accommodate a forward assist if you want to run one.

This bolt carrier group will stand up to your most punishing tests whether you use it on duty or just for fun at the range. It also features a laser etching of the Spike's spider logo, which is visible through the ejection port with the bolt in the forward position. 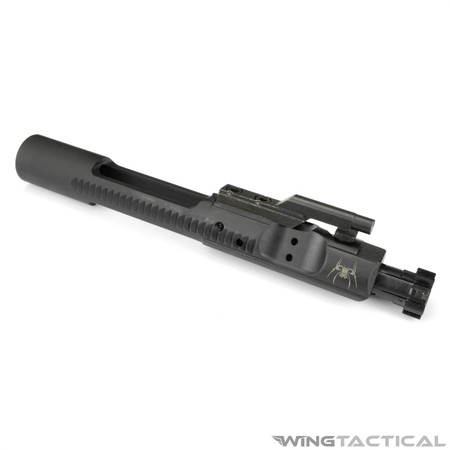