The X4 Titanium Muzzle brake by 2A Armament is a lightweight muzzle device designed to cut the felt impulse and control the motion of large bore rifles on firing. When you need to master the recoil of your 7.62mm or .308 caliber rifle, the X4 is the lightweight brake you need. Like its steel counterpart, the X4 Titanium Muzzle Brake will improve your confidence and the accuracy of each shot while allowing you to reacquire your target with amazing speed.

The 2A Armament X4 muzzle brakes are designed with two separate chambers to control the firearm's motion. The first section of the X4 manages the direction of gasses that cause recoil like a traditional muzzle brake would. With the pressure of those gasses redirected to the side, the backward motion of your rifle is reduced and you take less punishment when you shoot. Post-shot recovery will be much quicker and you’ll be much less likely to flinch than if you knew a big kick was coming every time you pull the trigger.

The second stage of the X4 Titanium Muzzle Brake is all about the follow-up. The second chamber does the work of a compensator. When you use an X4, your scope will stay on target. In addition to managing muzzle rise, 2A Armament has designed the X4 so that circular rotation is controlled, keeping you dead on target when it counts. The X4 also controls muzzle flash so you don't have to wait for the fire to clear and you’ll take aim for the next shot before anyone else.

The craftsmen of 2A Armament precision machine each X4 from quality materials in Boise, Idaho. American workmanship promises that 2A takes as much pride in your accuracy as you do. 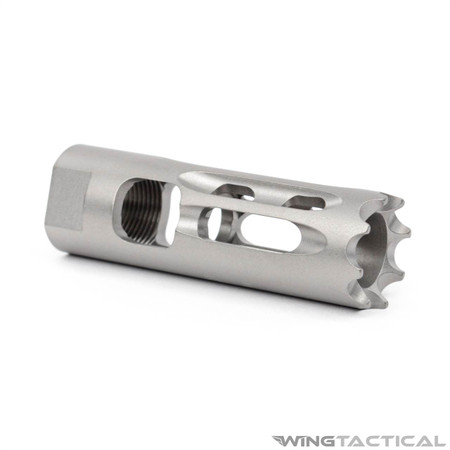