It doesn’t matter if you’re a tactical operator frequently under deployment or a weekend range enthusiast, as a shooter, you want the best equipment. Most of us have to temper that desire with the need to keep food on the family table. Fortunately, there are some upgrades that can vastly improve the function of a rifle without breaking the bank. One upgrade that’s as easy as it is inexpensive is to swap out your existing AR-10, LR-308, or SR-25 action spring for a Strike Industries Flat Wire Buffer Spring. If you happen to be building a new rifle, you’ll be pleased to find that this simple choice will give you far better performance than many competitor’s components.

The Strike Industries AR-10 Flat Wire Buffer Spring has a lot more backbone that most original equipment springs on .308 AR systems. The increased bolt load this spring creates makes for a smoother, more reliable cycle. This high-quality replacement spring is made from chrome-silicon steel that’s been cryogenically treated to give it greater resilience. It will last longer than untreated springs and give you more consistent performance than standard OEM springs which are frequently the Achilles’ heel of AR systems. It won’t weaken over time, so you get more consistent performance for the entire service life of your weapon.

When you replace an OEM spring with the Strike Industries Flat Wire AR-10 Buffer Spring, you’ll be shocked by the amount of improvement such a simple change can make to an existing weapon system. The first time you take it out, you will find that controlled harmonics decrease perceived system vibration allowing you to send each round down range faster. You won’t be distracted by the infamous AR “twang” either. It’s just not an issue when you use this superior action spring.

The Strike Industries AR-10 Flat Wire Buffer Spring is a drop in replacement for standard length buffer springs in AR-10, LR-308, and SR-25 rifles. You won’t need to modify anything to put this little sleeper to work, just replace your existing buffer spring with this one and reassemble everything as it was. Your action will perform more smoothly, you’ll shoot more quickly and consistently. Best of all, you don’t have to tell the competition why. 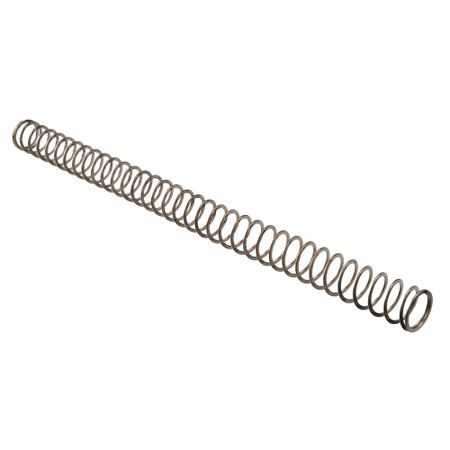