Aero Precision is a brand known for making some high-end AR-15 parts, and their M4E1 Complete Upper Assembly is no exception. This upper assembly is designed with a 14.5" barrel, which has a pinned Gamma 556SL muzzle device that completes its 16" legal length for a rifle.

The barrel is made from Mil-Spec 4150 Chrome Moly Vanadium steel, which has better strength, high heat performance, and corrosion resistance than a standard steel barrel. In addition, the barrel comes with a pinned VG6 Gamma 556 SL Muzzle Device, which has an angled three-port design and significantly decreases perceived recoil and muzzle rise. This upper assembly has a low-profile mid-length gas tube.

You get a modern 12.7-Inch ATLAS M-LOK Handguard with this Aero Precision upper assembly. The handguard has M-LOK slots on both sides and the bottom, whereas it has a continuous Picatinny rail on top.

The receiver is made from 7075-T6 Aluminum, and it is compatible with any standard Mil-Spec bolt carrier group and lower. It features a forward assist and port door and has M4 feed ramps to improve reliability. 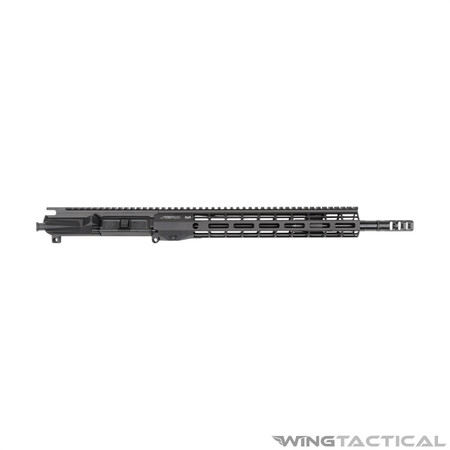