*This upper assembly does not come with Bolt Carrier Group and Charging Handle.

NOTE: The EPC last round bolt hold open is ONLY compatible with appropriate GLOCK® pattern magazines.

Pistol-caliber carbines are an excellent alternative to rifles. They are great for home defense and are a more affordable firearm for target shooting at the range. Moreover, because of their low recoil, many people also use them for competition shooting.

If you are looking to build a pistol-caliber carbine, you should check out the EPC-9 complete upper receiver from Aero Precision. This PCC upper assembly comes in multiple configurations. However, this one has a Flat Dark Earth finish on the receiver and handguard, and it has a 16-inch rifled barrel.

The barrel on this upper assembly is made from CMV steel, which is the same kind of steel used on Mil-Spec rifles. Chrome Moly Vanadium has better corrosion resistance, strength, and heat dissipation properties than standard steel. The barrel is threaded and comes with an A2-style flash hider from the factory.

Since the EPC-9 is a direct blowback weapon, it doesn't have a gas system. It comes with two different handguards that you can choose from. The Aero Precision Atlas R-One handguard has M-LOK slots on both sides and the bottom, and it features a full-length Picatinny rail on top. The Atlas S-One is quite similar to the R-One, but it does not have a full-length Pic rail on top. Instead, it has a small section of Picatinny rail on the front and rear of the handguard, which can be used to mount iron sights.

The EPC-9 receiver is made from 7075-T6 Aluminum. It features a last-round bolt hold open mechanism. However, it only works with compatible Glock magazines. 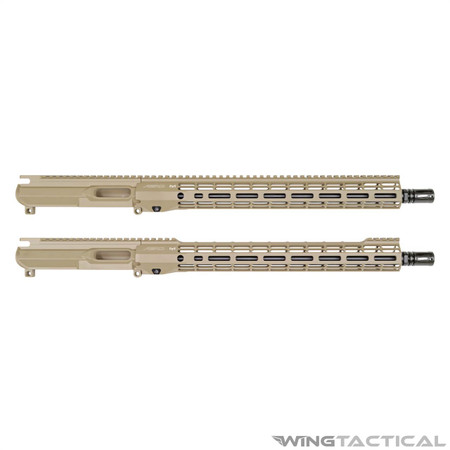