You've picked a handguard with M-LOK technology. You want flexibility and you’re done wasting time with old-fashioned attachment systems. The Odin Works M-Pod M-LOK Bipod Adapter is the Harris bipod adapter you need to keep ahead of the competition.

The ODIN Works M-Pod M-LOK Bipod Adapter is a bipod adapter engineered to work with today’s most progressive attachment system, the M-LOK slotted rail. The M-Pod works smoothly with most Harris style bipods. This low profile adapter won’t get in the way of your grip or snag on things when you don't have a bipod equipped. Best of all, because it features M-LOK technology, it easily adjusts position in increments as small as half an inch. Precision adjustability is key when millimeters mark the difference between you and the competition.

ODIN Works uses 6061 aluminum as the base material for its M-Pod M-LOK Bipod Adapter. Skilled American craftsmen precision machine each piece and give it a durable black anodized finish. The final product weighs in at just three-quarters of an ounce complete with mounting hardware. Your new Harris bipod adapter will attach painlessly to your M-LOK rail system and it won't add unwanted mass to a low-impulse rifle system.

To install, simply place the ODIN Works M-Pod M-LOK Bipod Adapter in the desired location on your handguard and lock it in place with the M-LOK locking nuts. You don’t need to get at the back side of the rail and it’s not a problem to relocate the component when you want to. The ODIN Works M-Pod M-LOK Bipod Adapter is packaged complete with M-LOK screws and nuts as well as a hex wrench so you won’t need to hunt for extras when it’s time to install it. 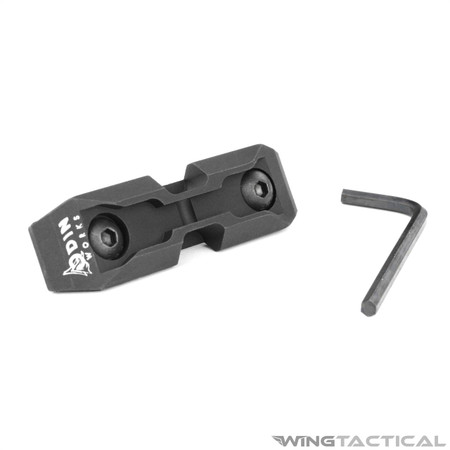