You're looking for a quality mounting solution for a Harris style bipod that will fit the Picatinny rail on your handguard and won’t unbalance your lightweight rifle build, or cause grief when it's not in use. The ODIN Works P-Pod Picatinny Rail Bipod Adapter is the missing piece to your puzzle.

This Odin Works Harris bipod adapter fits the Picatinny rail on your handguard and it won’t get in the way when you leave the bipod behind. It’s so low-profile, you’ll forget it’s there. The attachment pin is lower profile than a sling attachment stud so it won’t catch on things when your bipod isn’t in use. Weighing in at just one ounce, it won’t mess with the hard-won perfection of your lightweight competition AR system either.

The Odin Works P-Pod Picatinny Rail Bipod Adapter is machined from quality 6061 aluminum and comes with a black anodized finish to blend flawlessly into your handguard. This Harris bipod adapter installs quickly on your standard Picatinny rail. Simply slip it into place and secure it with the provided screws. ODIN Works even includes the hex wrench you need to tighten the mounting screws; they leave nothing to chance. After it's installed, your P-Pod adapter will allow you to quickly attach your bipod for stable shooting. It detaches just as easily, allowing you to transition from one shooting style to another with minimum fuss.

The professionals at ODIN Works bring knowledge from aerospace and other outside high-tech industries to the table to join with people who have spent their entire careers in the firearm industry. Each innovative product in the ODIN Works lineup has been put to task in the real world by the same men who create them. Their goal is to make every customer a better shooter. 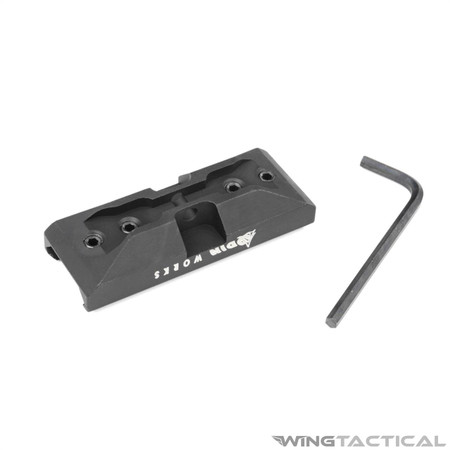