The small arms market has evolved a lot in a short time. Today’s manufacturers are putting a lot of thought and effort into the production of improved versions of small parts that might have been considered inconsequential in the past. One of those parts that has come to the forefront after spending decades as an afterthought is the takedown pin. Battle Arms Development has stepped forward to address the needs of today’s shooter with the Battle Arms Quick Release Rear Takedown Pin.

The BAD Quick Release Rear Takedown Pin is a total redesign of the rear takedown pin you’ll find in most tactical rifles. This extended takedown pin is more than an elongated version of the pins of yesterday. The Battle Arms Development team created this pin to fulfill the demand for a variable use extended takedown pin that will speed the reloading process for those who are using devices that make it necessary to open the receiver, separating the upper and lower before magazines can be swapped.

The Battle Arms Development Quick Release Rear Takedown pin works in multiple positions to give the operator the desired effect. In one position a partial extraction of the pin allows you to open and separate the receiver assembly for reloading, but without letting it swing free. As a result, you load faster with less awkward juggling of your rifle because you’re no longer stuck with a free swinging upper. If you want full separation, simply rotate the pin and pull it free from the receiver assembly, allowing the upper to pivot freely on the forward pivot pin.

**This product is not designed and intended as a legal compliance device or product. Battle Arms Development makes no claims or guarantees that this particular product will alone, or in-conjunction with any other device, render any firearm lawful under any State, Federal, or Local laws. 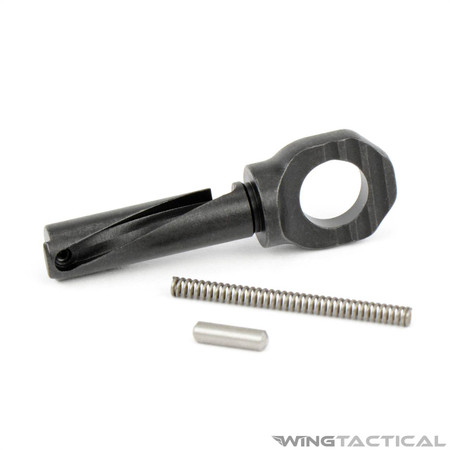