What Does This A2 Flash Hider Do?

Flash hiders (also known as flash eliminators, flash guards, flash cones and flash suppressors) reduce the visible signature caused by the gases exiting the barrel at high speeds. Flash hiders work by cooling and/or dispersing the burning gases, thereby protecting the shooter from becoming blinded by his own gun in low-light shooting conditions. The primary purpose of the birdcage flash hider is to benefit the shooter, although reduction of visible flash to the enemy is an additional bonus.

The problems of visible firing signatures became apparent with the advent of the modern rifle with a shortened barrel. When a bullet is fired from a long barrel, most of the powder is burned out before the bullet exits the barrel. With a shorter barrel, however, the powder has less space to burn before blowing out of the muzzle. The end result is a blinding pyrotechnic-strength flash that can very effectively blind the operator in night conditions. The A2 flash hider will redirect the flash to the side and away from the shooter's line of sight, thereby preserving night vision.

Those who engage in nighttime operations should be aware that no flash hider completely eliminates flash signature. Operators will still be required to change position to prevent the enemy from zeroing in. Some flash hiders have prongs on the end as part of the design. The birdcage design of this A2 flash hider eliminates the prongs on other configurations, making it more user-friendly and less likely to get caught on clothing or vegetation. 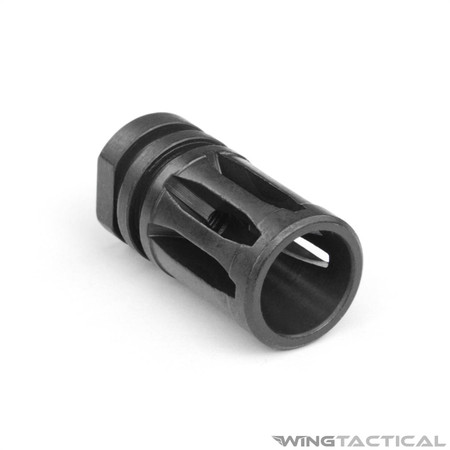