If you’ve ever found yourself at war with the cotter pin that comes as standard equipment as a firing pin retaining pin in your AR-15, Wing Tactical is happy to let you know there’s a better way. Free yourself from the frustration of mangled cotter pins that won’t come out without a fight and won’t go back where they came from. Replace them with KNS PERMA Pin Firing Pin Retaining Pins.

The KNS PERMA pin is a sturdy machined pin that is a direct drop-in replacement for the antiquated cotter pins that are original equipment firing pin retainers in AR-15 bolt carrier groups. The KNS PERMA Pin installs easily. Simply orient it with the slotted feature horizontal to the bolt carrier group and press home with your fingers, no tools required. The KNS Firing Pin Retaining Pin removes just as easily, simply use the end of a round, or another appropriately sized item to push it back out of the BCG and remove. It will still be whole, undamaged and ready to return to work when you want to reinstall your firing pin and reassemble your bolt carrier group.

The team at KNS Precision understands that you want your armorer’s work to be a quick and painless as possible. They’d rather be shooting than hunting for springs or fighting retaining pins and detents too. Using a combination of desire and technical know-how, KNS brings the small arms market the parts we need to make installations less frustrating and more secure than they were with flawed Mil-spec equipment. Upgrade to KNS and enjoy building firearms again.

Remove the stock cotter pin and replace it with the new PERMA Pin. Install the Perma pin with the slot in the pin horizontal (-) with the length of the bolt. Then, align the Perma pin with both holes in the bolt carrier and press the pin in. The pin will seat itself and become easier to install and remove with continued use.

Note: The pin may be broke if it meets rough ridges in the corner holes and excessive force is use. Lightly remove any ridges with a round machinist file. 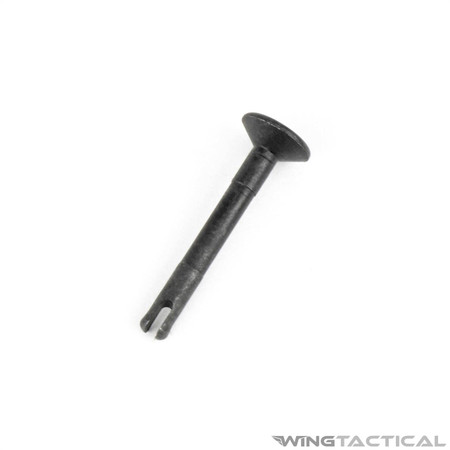