The Armorer’s job is simple: assemble a variety of parts into a working firearm. Okay, it’s not that simple. Especially when some of those parts have a mind of their own, or so it seems. Traditional bolt catch roll pins are the sort of wicked little parts that seem to exist just to make ordinarily even-tempered guys into foul-mouthed lunatics. If there’s any doubt in your mind, just try to send one of those little devils home and wait until that pretty lightning strike scratch appears on your new receiver when the punch slips. Fortunately, KNS Precision elected to take on the problem of installing bolt catch roll pins by designing one that you can install without destroying anything. The KNS Bolt Catch Retaining Pin is here to make you love building guns again.

It’s time to install the bolt catch retaining pin, forget the hammer and punch, KNS made life better than all that nonsense. Simply place your KNS Bolt Catch Retaining Pin though it’s proper holes in the receiver and the bolt catch after placing the catch, it’s spring and detent. After the pin is placed you’ll simply install the included c-clip to secure the KNS Bolt Catch Pin and you’re done. No cussing, no scratches, no problem.

KNS Precision manufactures parts that solve problems. From anti-rotation pin sets and pivot pins that don’t require special tools or an act of Congress to install properly to the KNS Bolt Catch Retaining Pin, everything KNS manufactures makes shooting life easier and more secure than the traditional parts they replace. When you want a change for the better, upgrade to a KNS Bolt Catch Pin. 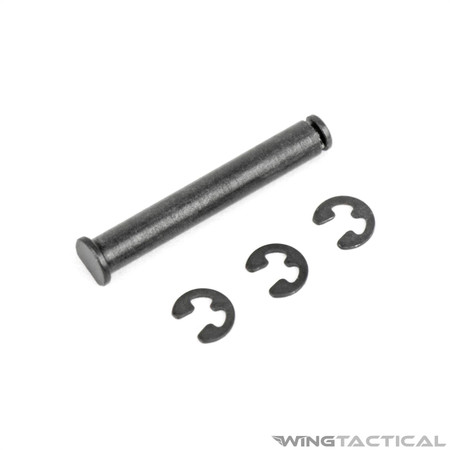