I know, you watch what you eat, and you exercise. You at least cut back on the drinking and smoking. You're the picture of health. Then, the radio falls into your hot tub and zap. It's the little things that get you. When it comes to your weapon, the lowly sling swivel is one of those little things.

You pour a lot of time and money into your weapons. Even if you shoot a piece right off the rack, it's still not cheap. People who don't own guns probably think we're crazy, but we bond with our weapons. How will you feel when it's your baby crashing onto the ground? All because you bought a low-quality small D-loop QD sling swivel. Hey, we've all scuffed her up on accident just getting the job done. That's called a battle-scar, and it comes with a cool story. That low-quality sling swivel snaps, and you don't even want to admit it to yourself.

Real shooters are getting harder to find. We don't pay for a name. We buy a purpose made product. If a component isn't up to the task, it doesn't stay on our weapon. A Spikes Tactical small D-loop QD sling swivel isn't flashy. It just works. This Spikes Tactical sling swivel has an ample release button. However, the whole end is low-profile, and the release button is slightly recessed. You can disengage the swivel quickly, even when you're wearing gloves. But, until then this Spikes Tactical small D-loop sling swivel is not coming off. Today, whether your goal is competition, self-defense, or serious tactical work, Spikes has got your back. 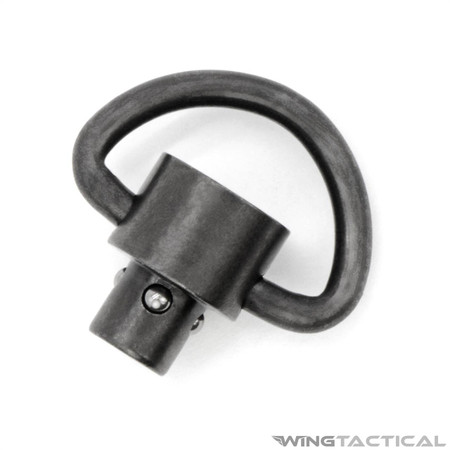