Striker fired pistols, with smooth frames and slides, are easier to keep hidden and quicker to bring into action than hammer fired handguns, either from concealed carry or holstered at your hip. The downside with some striker fired pistols, is there is no quick way of determining if the striker is cocked. The Springfield Armory XD/XDM striker indicator took care of this by allowing a visual and tactile status check of the striker.

The popularity of the striker fire design increased with the development of Glock's "safe action" trigger. But common to the safe action mechanism, and similar designs came the problem of squishy triggers. Increased safety from an accidental discharge comes at the cost of having a trigger that breaks cleanly and doesn’t require a long, heavy pull.

Even though it is lighter than steel, the XD/XDm titanium striker status indicator has increased durability. With the addition of a new striker rebound spring, the titanium striker retains enough mass and speed to improve lock time, while ensuring consistent primer ignition. The third part of the kit, a reduced power striker spring, takes care of some of the squishy triggers and even reduces pull weight. 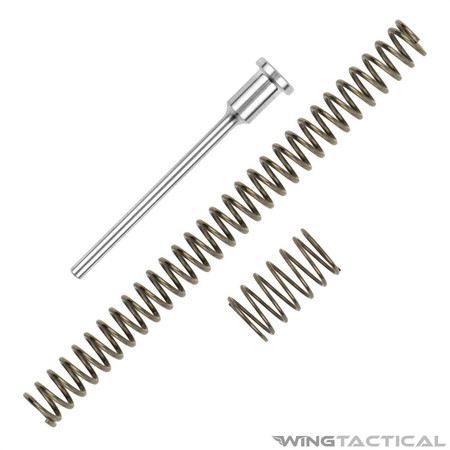