AR-10 and AR-15 have traditionally been two of the most popular rifles for military use, sporting and target shooting. Contrary to popular belief, the AR does not stand for “assault rifle” or “automatic rifle.” It actually is an abbreviation for Armalite Rifle, the firearms manufacturer that first developed the AR platform in the mid-1950s. While they look similar, the AR-10 and AR-15 are different in several important aspects.

AR-10 is a specific weapon model that made by Armalite. Nowadays when people say AR-10, they don't necessarily refer to the Armalite AR-10. The term "AR-10" has became the general name for AR-15 style rifles that chamber in .308 caliber. To avoid confusions, in this article, we will refer all .308 AR platform rifles "AR-10".

Unlike AR-15, some AR-10 parts are not interchangeable between brands. In today's market, Armalite style and DPMS style are the two most popular specification that manufacturers use when making AR-10s. These two AR-10 platforms are not the only .308 AR platforms available but they do dominate the market. When choosing parts for your AR-10, you should first find out which AR-10 style it is so you don't have to stuck with the wrong part.

In this post, we’ll provide an AR-10 vs. AR-15 comparison, including which parts are and are not interchangeable.

One of the first things you’ll notice when you pick up an AR-10 for the first time is its surprisingly light weight compared to other .308 semi-auto rifles. This is due to its direct impingement design instead of the piston-driven design that’s found on most other .308 semi-auto rifles. Depending on the model, it will weigh from 7.25 to 8.9 pounds without the magazine. AR-10 features include the ability to accept detachable magazine, an adjustable front sight for accuracy at elevation, an adjustable rear sight for windage, an aluminum alloy receiver, in-line stock and pistol grip. The top picatinny rail on the AR platform offers a perfect mounting solution for variety of scope, red dot or holographic sights.

The  AR-15 is essentially a modified version of the AR-10 that was developed in the late 1950s. The AR-15 is even lighter than the AR-10, with models weighing from 5.5 to 8.5 pounds. Since the AR-15 is lighter, it allows shooters to maneuver quicker. However, the benefits of a lighter weight stop at the rifle itself. The AR-15 is chambered in 5.56 NATO / .223 Rem, and the small size of this cartridge gives you the ability to carry more rounds on a person or rifle compared when to the .308 WIN, which is bigger and heavier. There are numerous magazine manufacturers making magazines capacities up to 100+ rounds for the AR-15. Another noteworthy difference between the AR-10 and AR-15 is its softer recoil, which leads to quicker and more accurate follow-up shots.

What's the Difference Between AR-15 and AR-10

One of the most obvious differences between the AR-10 and the AR-15 is the caliber. The AR-10 utilizes the .308/7.62x51, while the AR-15 uses the .223/5.56 x 45 cartridge. The lower receiver and other key components on the AR-10 are also somewhat larger than on the AR-15, which accounts for the slightly heavier weight. With the AR-10, there is more space between the pistol grip and the edge of the lower receiver. The AR-10’s magazine walls are also larger to accommodate the larger rounds.

Because of their similar design, there are some interchangeable AR-15/AR-10 parts. However, the size and caliber difference makes certain parts incompatible. To complicate the issue, the AR-10 and AR-15 are now made by numerous manufacturers including Armalite, Black Rain Ordinance, Seekins Precision and others, with each company producing its own unique versions. This makes direct comparisons somewhat challenging. For instance, certain companies make the original Armalite-style AR-10 rifle, while others use the DPMS format. 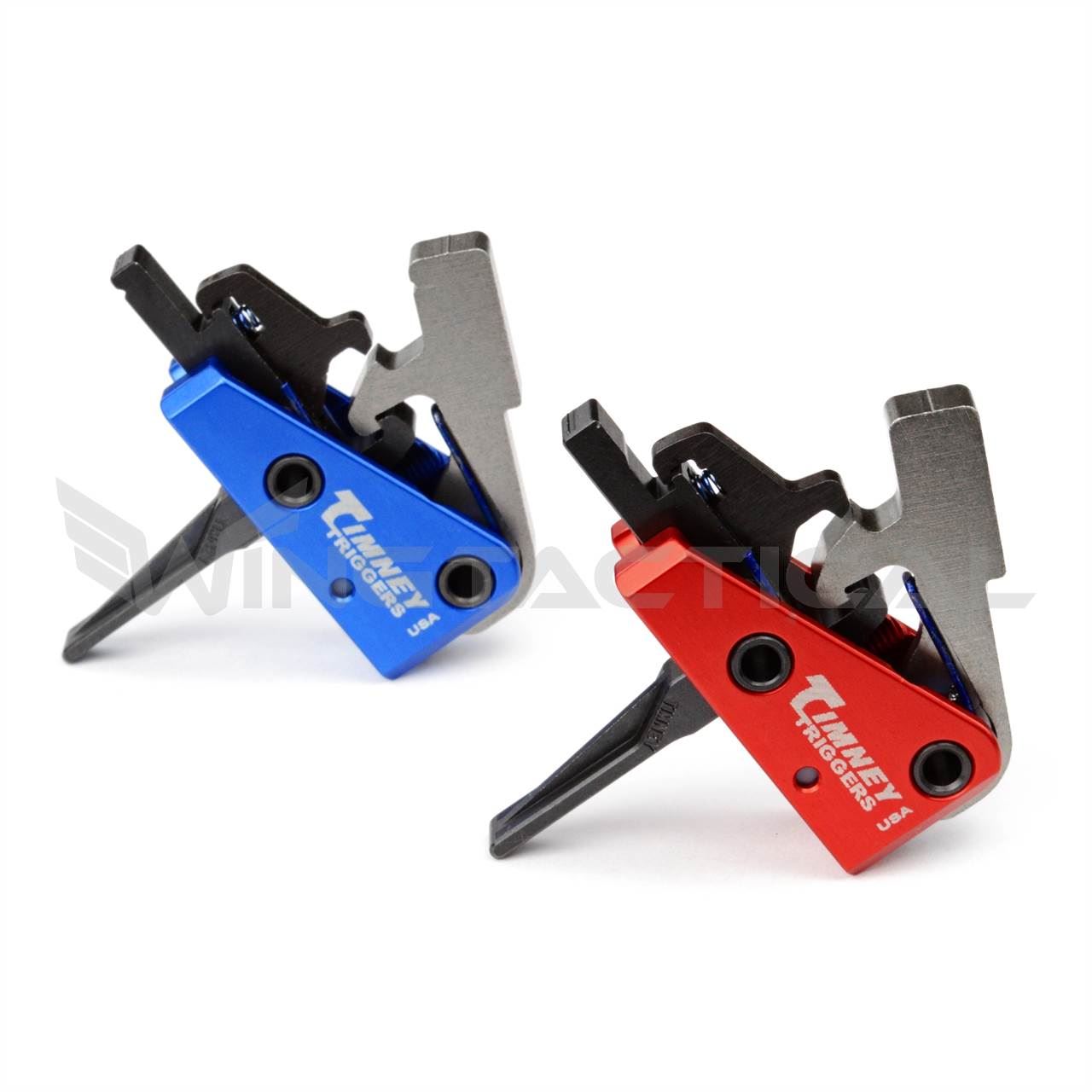 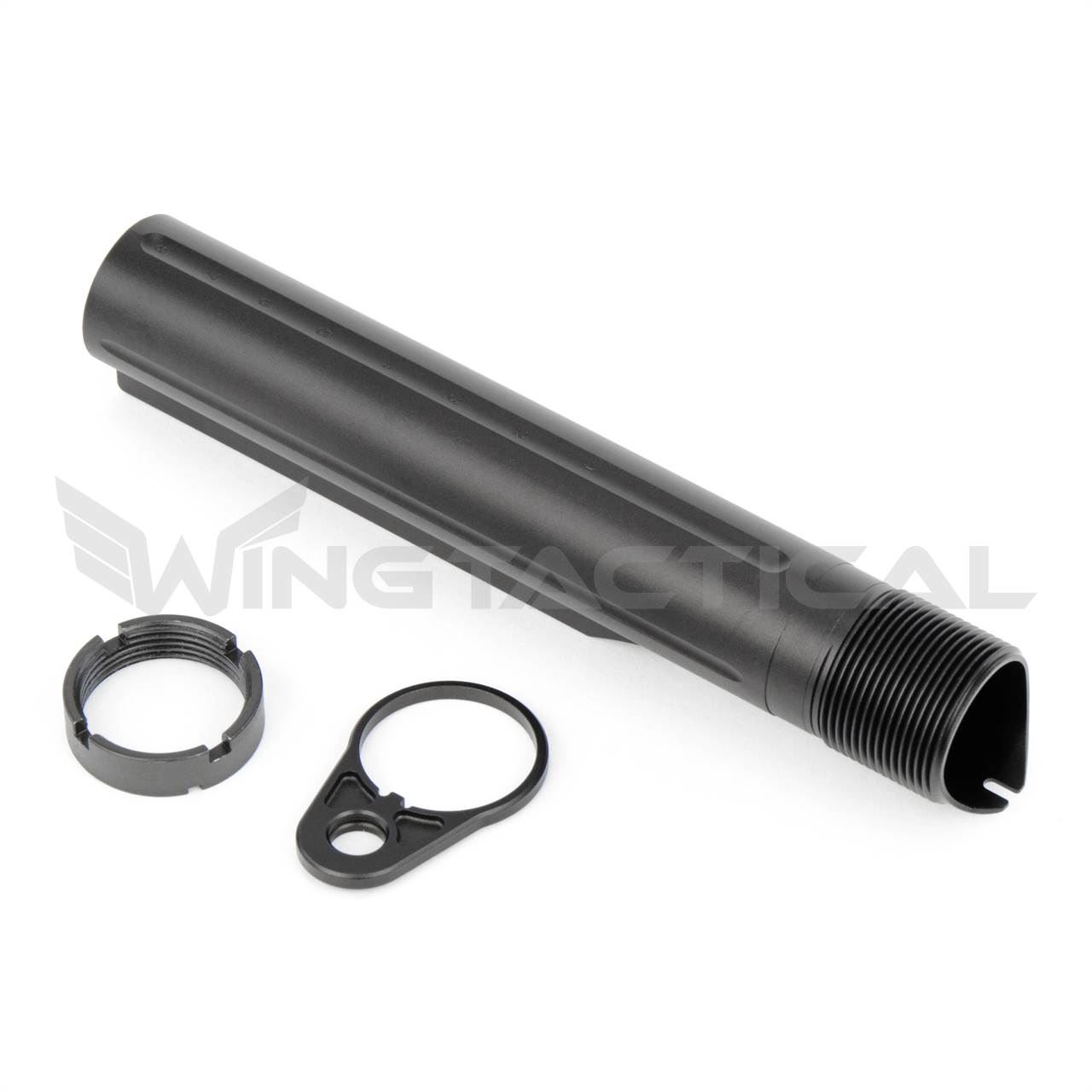 Parts that are typically not compatible between the AR-15 and AR-10:

Wing Tactical is your source for a wide range of AR-10 and AR-15 parts, including interchangeable parts such as pistol grips, trigger springs, safety selectors and many others. All parts come from top firearms manufacturers to ensure the highest possible quality. We only sell brand-new products, never used or refurbished items. You also enjoy peace of mind knowing that we don’t sell any product we wouldn’t use ourselves.

You can also count on Wing Tactical to deliver world-class customer service. Take advantage of next-day shipping to get your AR-10/AR-15 part as quickly as possible. You can place your order quickly and securely right here on our website. And if you’re not completely happy with your part,  simply return it to us within 30 days for a full refund.

Check our inventory of interchangeable AR-15/AR-10 parts, and give yourself an edge!

View Our Selection of AR-15 Parts

View Our Selection of AR-10 Parts